Bar Crusher is best known for its die-hard, no compromise fishing boats, but in mid 2017 this Melbourne based company introduced its first general purpose model, the 615BR. Family boaters and fishermen will appreciate the spacious bow seating area which converts easily into an elevated casting deck, along with Bar Crusher’s tough plate alloy construction and safe, seaworthy deep vee hull.

Crossover boats – the ones with both fishing and boating amenities – are becoming increasingly popular. US boat builders have been making them for years, with the current trend to fit big centre console fishing boats with a seating/lounge compartment up in the bow. They also have runabout-style, dual-console boats with the same bow seating area, but with fishing features aft.

In Australia we call these US dual-console boats “bowriders”. Aussie makers have long produced alloy and fibreglass bowriders, but most have been designed for family boating with only a few features for serious anglers. 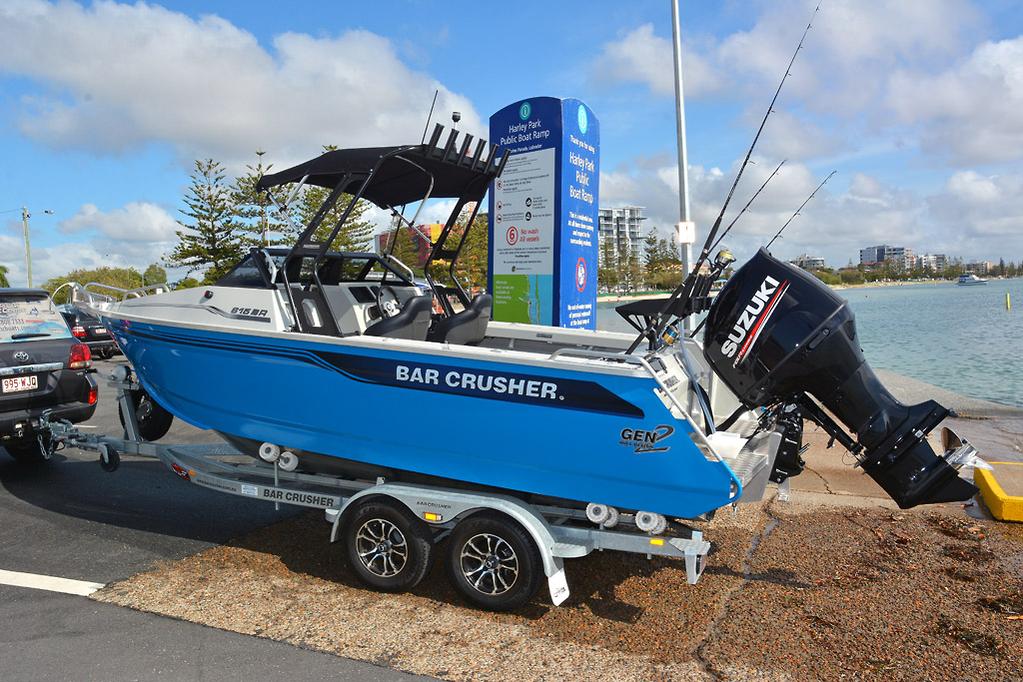 Bar Crusher’s latest model is the opposite. This Melbourne company’s first bowrider model is a fishing boat first and foremost – but it does have a clever bow seating and lounging compartment forward so it can easily double as a bay cruiser and family all-rounder.

Equally well designed is the rear cockpit, which has a bench seat that folds out from the transom wall to seat three adults. When space is needed for fishing, the bench lifts up, and folds back to form the transom wall.

With ample power on the transom, the Bar Crusher 615BR is also capable of social tow sports. This allows for some serious fishing in the morning, followed up with an afternoon spent hauling the kids about on wakeboards, skis and other water toys.

Brisbane Bar Crusher dealer, Australian Marine Centre, has 615BR package prices starting from $72,000 with a Suzuki 140hp outboard and a tandem-axle galvanised steel trailer. The latter is custom-made for Bar Crusher by Melbourne’s Easy Tow Trailers, so the trailer fits the hull like a glove.

The trailer is also equipped with Bar Crusher’s Bar Catch winch post auto latching system. This clever device can be set for auto releasing the boat for launching and then to automatically catch and secure the boat (self-latching into the towing/winch eye) during drive-on retrievals. The mechanism makes it easier to launch and retrieve the boat single-handed. 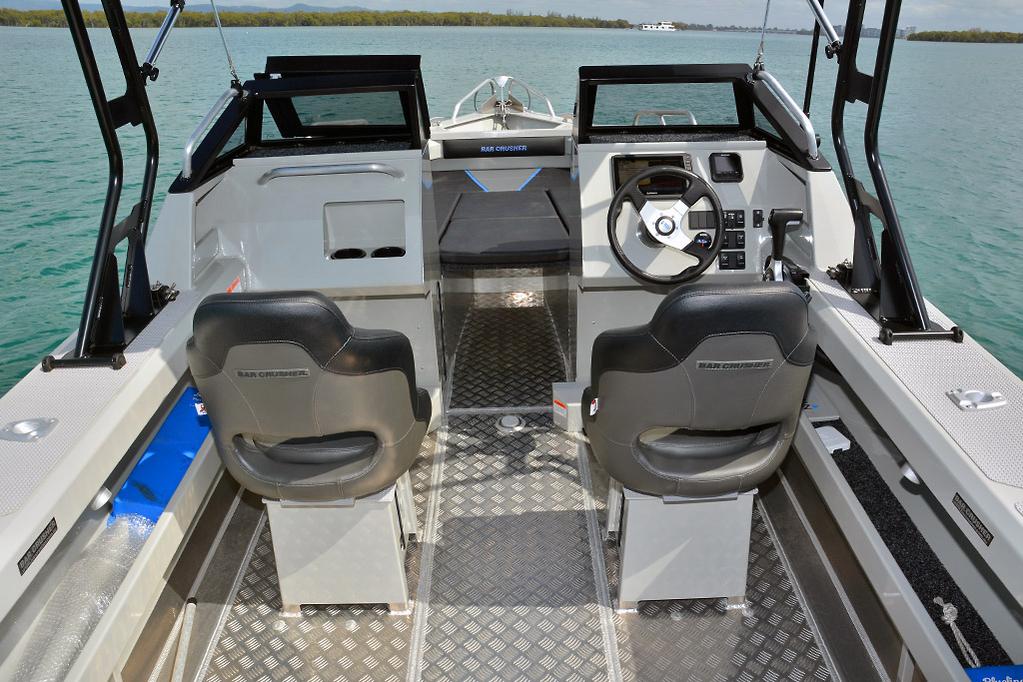 Our test boat was optioned with a number of features, along with a larger, 150hp Suzuki extra-longshaft (25-inch) four-stroke outboard engine with a stainless steel propeller. 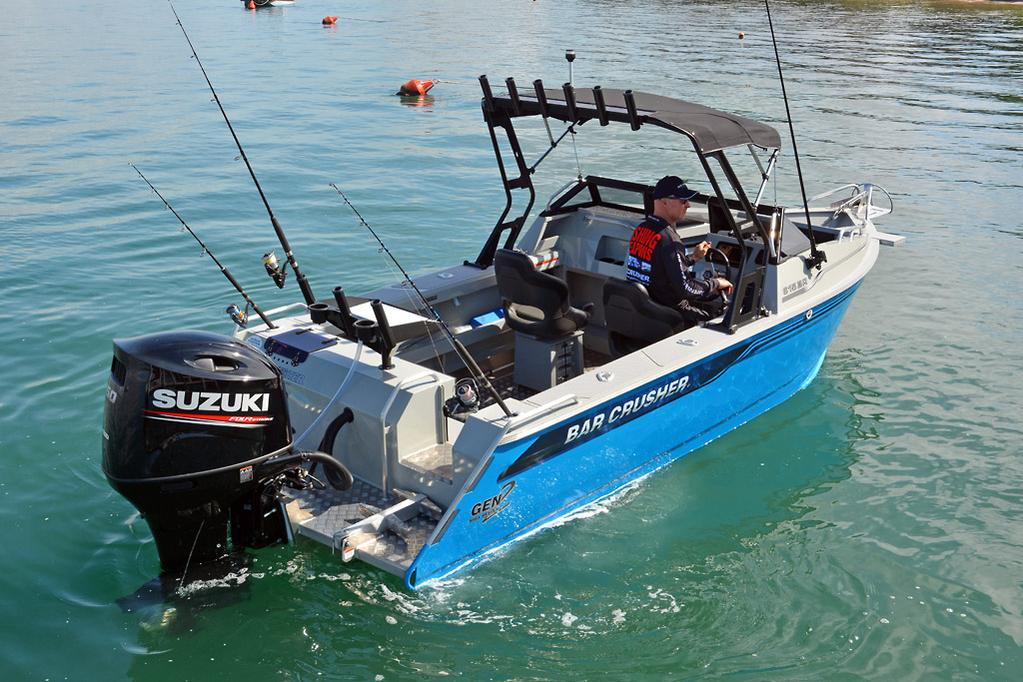 The primary difference between the two is that the Bar Crusher’s cuddy cab-based model has an elevated, or heightened helm station. Importantly for anglers, the higher position of the dash and engine controls allows the skipper and crew to stand comfortably at the helm during trips to the offshore fishing grounds, sheltered by the windscreen and with space overhead to stand underneath a bimini. 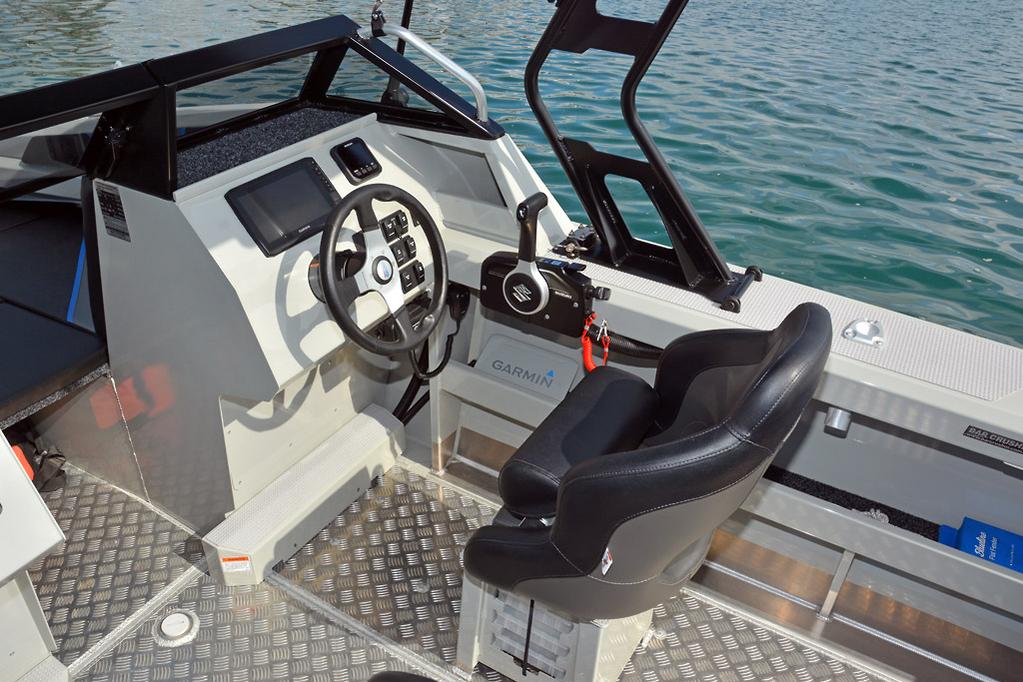 You also have the option to drive the boat while seated. The hip-hugging bucket helm chairs have swiveling and sliding bases, along with a flip-up front bolster. This allows for the easy adjustment of the chair to suit a standing or seated skipper.

Whether you prefer to sit or stand, the steering wheel and side-mount throttle fall easily to hand, and the skipper has a clear view of the surroundings through the over-built safety glass windscreen.

There is space on the fascia for a medium-sized, flush-fitted electronics display, along with the engine instruments, switch panel, and more.

Opposite, the port side passenger console has an open glove compartment with two cup holders, along with a recess alongside the chair for small items like phones, wallets, car keys. 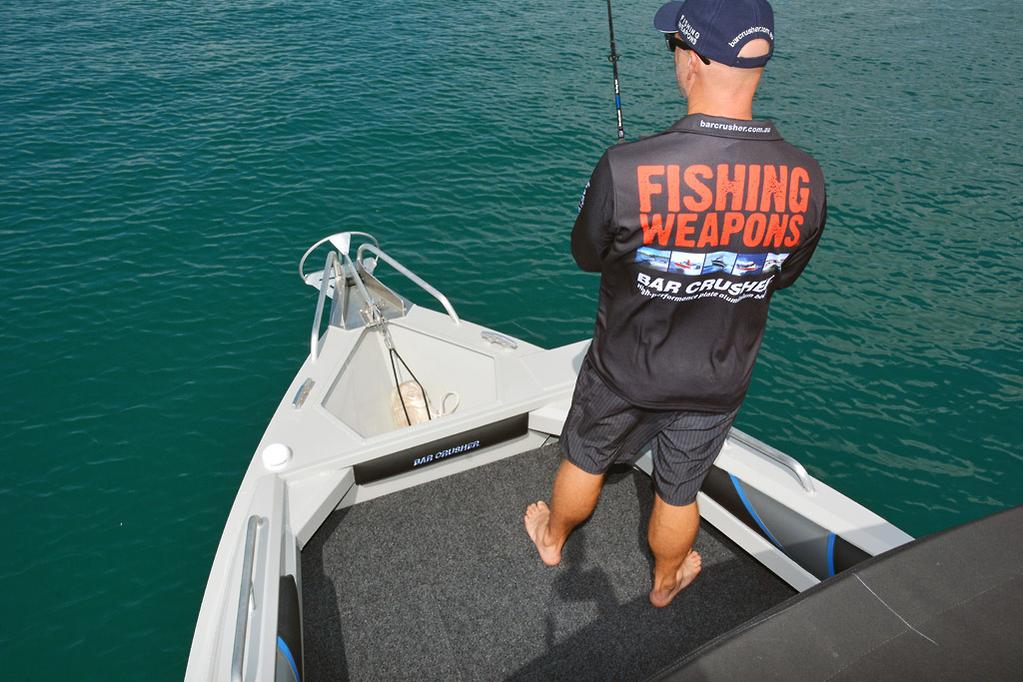 Between the helm and passenger consoles there is a checker-plate floor companionway leading forward, past the centre-opening windscreen to the bow seating/casting deck.

The bow compartment can be configured as an elevated casting deck, as a full-width sun lounge (with the optional cushions), or as a vee-shaped seating area.

As noted earlier, a drop-down bench seat aft can be optioned with a padded cushion to seat three people.

Underneath the forward seats are three big lockers for stowing safety gear.

Fishing tackle, deck lines and general items can be stowed aft in the cockpit-side storage pockets, and in a small nook alongside the dual batteries, which are elevated on a shelf under the transom to shelter them from the weather. 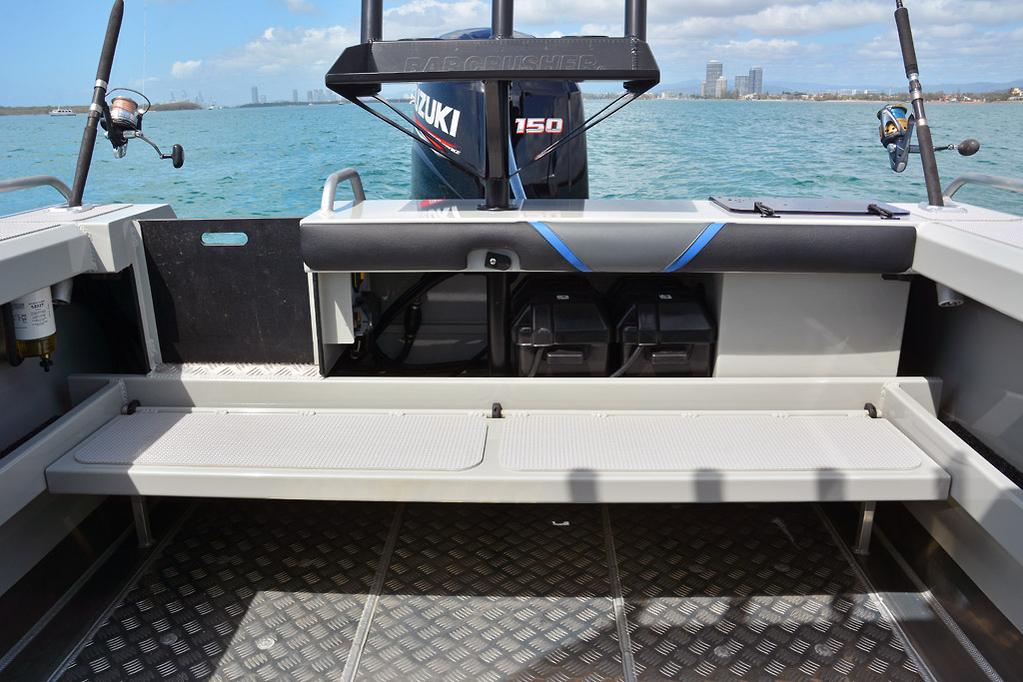 The Bar Crusher has a full-height transom with roughly 780mm of internal freeboard around the perimeter of the 2.6m long checker-plate cockpit. The uncluttered space behind the helm chairs is almost square at 1.7m long x 1.85m wide.

Some of the other cool features include a lift out transom door on the starboard side, a large live bait tank built into the port side transom, cutting board/bait station, non-slip grip pads to the massive 280mm-wide side coamings, rear boarding platform and ladder, and a built-in poly plastic berley bucket.

The Bar Crusher also has a 140-litre underfloor fuel tank that is deck filled so you can lift the filler cap to physically see how much fuel is remaining in the tank – and/or make up an old-fashioned timber dowel dipstick to compliment your dash-mounted fuel gauge.

The Gold Coast Broadwater was deceptively calm for the first part of our test of the Bar Crusher 615BR. We completed the inshore photos and performance runs on smooth inshore seas with light winds. However, for the offshore tests we were surprised by 2.0m swells that were sharpened to near vertical by the swiftly ebbing tide. Great conditions for boat testing, but a little hairy at the same time. 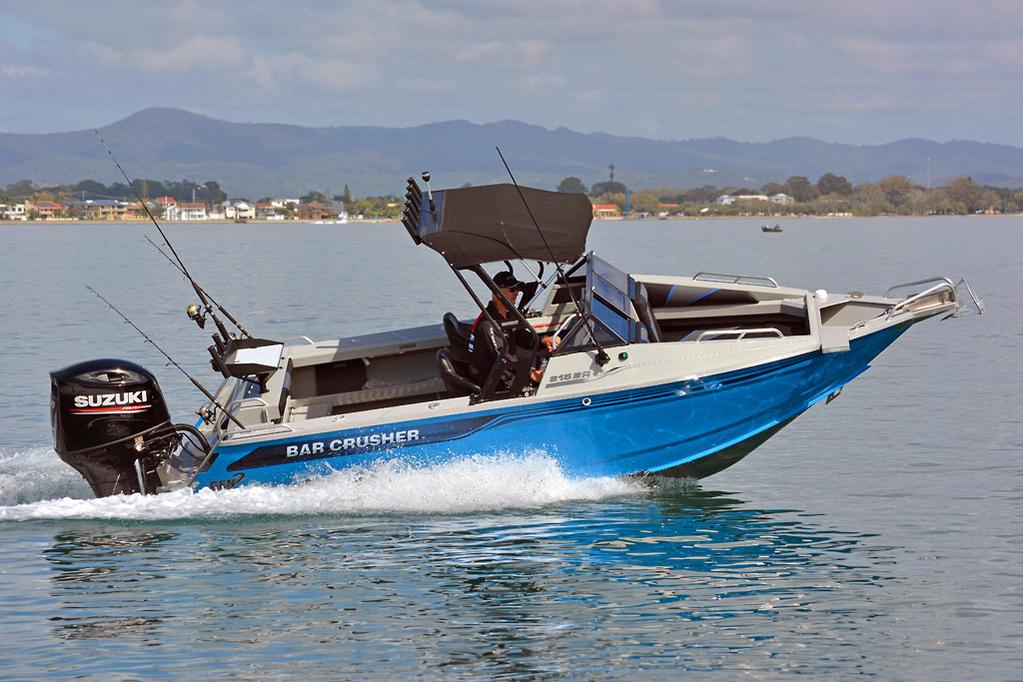 The Bar Crusher was up to the task, well capable of taming the weather and the rough seaway bar conditions.

Heading out through the entrance I timed our run to dodge the larger waves, using the grunt of the big Suzuki 150hp outboard to power between the wave sets.

Even then we did catch a couple of big waves, but the Bar Crusher handled the big seas very well. I was able to accelerate the boat up the waves, before quickly backing off at the crest and allowing the hull to drop calmly into the trough on the other side. 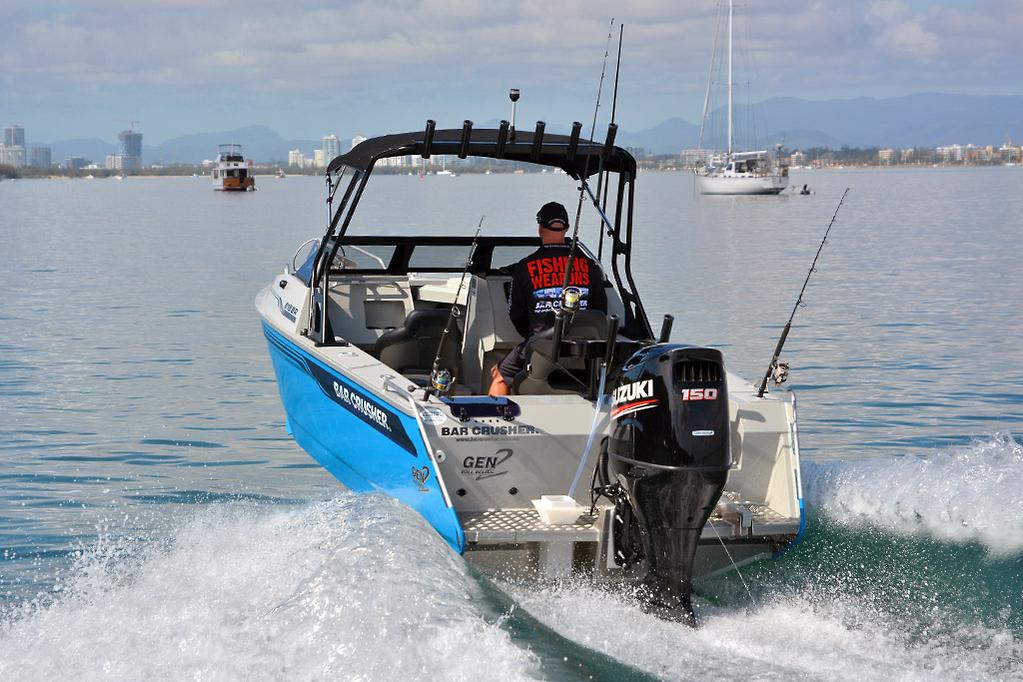 Coming back into the entrance was easier. I positioned the Bar Crusher on the back of one of the larger swells and “piggy-backed” on the wave, again using the power of the Suzuki to keep us there as the wave rolled in between the Seaway break-walls.

I wasn’t game to deliberately bury the nose of the Bar Crusher into the deeper wave troughs, but once through the worst of the conditions I did plunge the hull into the bottom of a wave and was pleased when the hull surfed easily and safely back out of it.

Overall, I was impressed with the handling, ride and performance of the 615BR. It has been a decade or so since I last tested a Bar Crusher, and I do believe the boats are now better than ever. Our test boat was smooth riding, comfortable and stable – the flooded keel firming up the boat at rest and limiting the amount of lateral rock and roll. 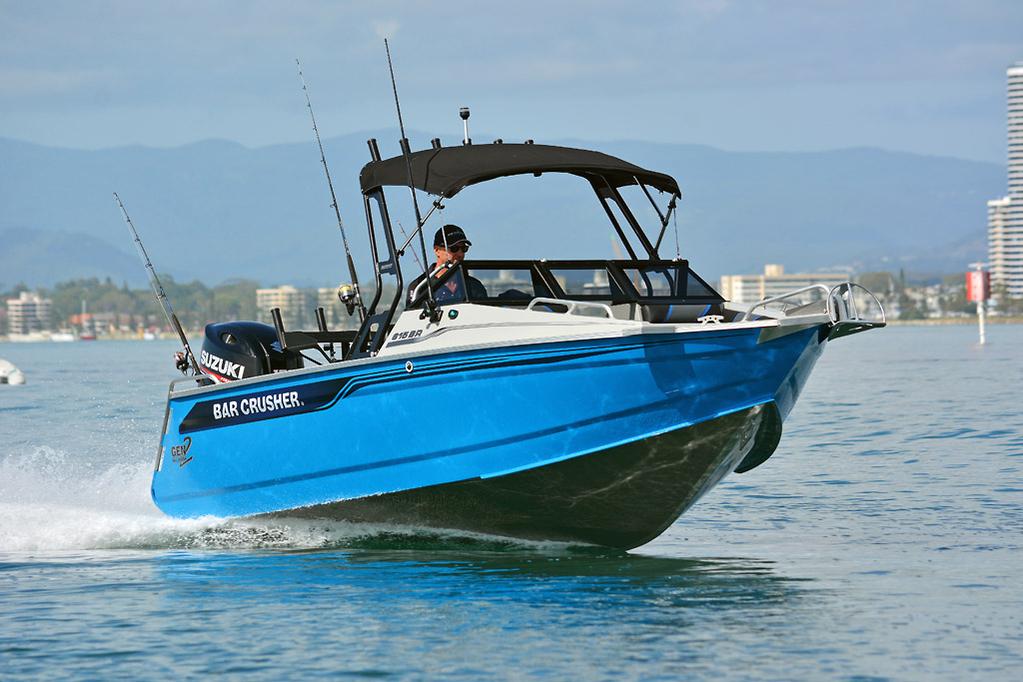 We had the maximum 150hp Suzuki outboard on the transom of our test boat and it was certainly not over-powered. You could get by with a smaller 115hp or 140hp model, but I enjoyed the performance of the boat with the larger engine, along with the 35-knot top speed. The extra grunt certainly helped in positioning the boat during our offshore test in rough conditions.

The 615BR is a worthy addition to the Bar Crusher stable, and an excellent choice for buyers looking for a general purpose fishing/family boat. The 615BR has the hull performance along with the fishing features and fit-out to chase barrel-sized tuna and billfish, but also has the seating, lounging and storage space for family boating, cruising and social tow sports. The Bar Crusher 615BR is an excellent all-rounder.

Priced from: $72,000 including a Suzuki 140hp four-stroke extra-longshaft (25”) outboard, and a tandem-axle Bar Crusher galvanised steel trailer with mechanical brakes.

Choosing the Best Boat for Your Style

Don’t own a boat but want to get out and enjoy the water? Then you need to come and see us at ...

Looking to buy a boat in Brisbane?

Brisbane is an ideal location for many boating fans, having a number of sports boat spaces, as wel...

With digital technology constantly evolving and with the recent introduction of Boating Made Better ...